The Nokia 6 series holds special value for HMD Global. The Nokia 6 was the first Android device to feature Nokia branding, and it was one of the manufacturer’s best-selling devices last year. Nokia did a magnificent job optimizing the software to run on under-powered hardware during its Windows Phone days, which is why budget Lumia phones weren’t laggy. That system doesn’t work on Android though, and to its credit, HMD fixed a lot of the performance issues with the 2018 refresh of the Nokia 6, the Nokia 6.1 2018. The Nokia 6.1 2018 retained a similar design aesthetic but offered much more powerful hardware in the form of a Snapdragon 630. The Nokia 6.1 Plus sits snug in the mid-range segment with respectable specifications and the Android One badge.

Just like many flagships and premium mid-range smartphones in the market, the phone is extremely slippery. The company has used over 90 per cent glass on the surface area of the Nokia 6.1 Plus but the element that gives it elegance also sacrifices grip. You might end up using a case. However, the phone does come with Corning Gorilla Glass 3 protection which can deal with minor falls and scratches well.

The tall display comes with an aspect ratio of 19:9, thanks to the notch. The pocketability of the Nokia 6.1 Plus is one of the best we’ve experienced lately. Despite the 5.8-inch display, the smartphone is compact in comparison to the bulky smartphones with the same screen size. The mid-range segment is now dominated by phones with large screens and a bigger overall footprint but Nokia 6.1 Plus can easily be managed single-handedly. In terms of quality, the screen is bright and colors are accurate. One can also hide the notch by opting for it in the settings. 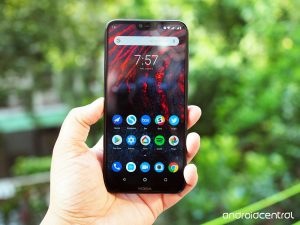 There’s a dual camera system arrayed vertically at the back, and a fingerprint sensor located underneath. The sensor isn’t located quite where your finger rests at the back, but the minor indent makes it easy to locate the module and unlock the phone. The Nokia 6.1 Plus has a single speaker located next to the USB-C port at the bottom, and a 3.5mm jack up top. The volume and power buttons are located on the right. Like most phones in this segment, the Nokia 6.1 Plus comes with a hybrid SIM card tray that sees the secondary SIM slot doubling up as a MicroSD slot.

The 3060mAh battery also managed to deliver a day’s worth of use consistently. The phone is currently on Android 8.1 Oreo, and HMD says it will deliver the Android 9.0 Pie update before the end of the year.