The ultimate android phone which is the Samsung Galaxy S10 represents the tenth anniversary of the Galaxy line and it is not a radical reinvention of the smartphone. Samsung’s new flagship is not lacking in innovation or ambition. The Galaxy S10 Plus is the world’s first phone with an ultrasonic fingerprint sensor built into Samsung’s new 6.4-inch Infinity-O display, and it’s also the first Galaxy S phone with five cameras, including an ultra-wide shooter on the back. The new ultra-wide camera produces impressive results, but the Pixel 3 offers better image quality in low light. 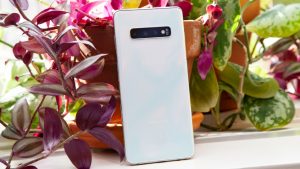 The ultimate android phone which is the S10 plus is the fastest Android yet because of Qualcomm’s new Snapdragon 855 processor under the hood. The PowerShare feature that lets you use the back of the S10 Plus to wirelessly charge other phones and gadgets and the epic 12.5 hours of battery life also makes it a very awesome gadget. Wireless PowerShare lets you charge other phones using the back of the S10 Plus and Galaxy Buds. The in-display ultrasonic fingerprint sensor works well when you press and hold your finger on the screen briefly instead of a quick tap. 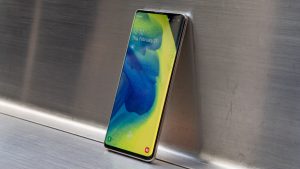 The quest for the all-screen phone is almost complete. The Infinity-O display on the Galaxy S10 Plus truly goes from edge to edge. With the exception of a narrow chin on the bottom, the S10 Plus has virtually no bezels. Samsung was able to do this because it used a laser cutter to carve out holes in the top right of the screen for the front cameras. The holes on the screen of the S10 plus can be distracting, especially when you’re using an app with a white background like Gmail. It’s like two tiny eyes staring at you. And there’s a reason Samsung created wallpapers for this phone that are darker toward the top right corner: to help hide these holes. 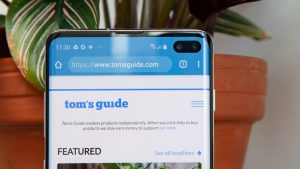 Camera rear: Triple Camera, with telephoto and wide-angle lenses of 12MP each and ultra wide lens of 16MP